The morning after the election, I tweeted something along the lines of, “If there is a silver lining to the election of Donald Trump, it’s that it should inspire a lot of good punk rock and metal over the next four years.”

Little did I know that, in addition to these forthcoming musical gems, this knuckle head’s rise to power would also get the folks behind some of our lexicographical institutions all fired up!

This whole thing started last Sunday, when Trump adviser Kellyanne Conway told Chuck Todd of NBC that that Trump Press Secretary Shawn Spicer was offering “alternative facts” when he told reporters that, “[The crowd at Trump’s swearing-in] was the largest audience to ever witness an inauguration, period.”

Not missing a beat, Merriam-Webster began making fun of the Trump administration through its Twitter feed, taking Conway to task for trying to sell “alternative facts” as, you know, a thing. 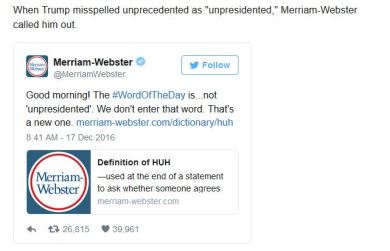 “A fact is a piece of information presented as having objective reality,” the dictionary company said in a  tweet that linked to a Merriam-Webster posting about how look-ups for the word “fact” spiked after Conway’s comment.

As awesome as that initial ribbing was, the story continues to get better as Merriam-Webster has continued to school the Trump administration on its use of words … or at least it’s attempts to use them.

And so, for its continued efforts to educate our “president,” as well as for its success in making dictionaries cool again, we here at the ARLCP tip our hats to Merriam-Webster. Hence our decision to make this lexicographical kerfluffle our “News Item of the Week.”

For more on the dictionary’s revenge, see the following articles:

Subtweet (v.): What Merriam-Webster Dictionary Is Doing to the President
NBCNews.com

The dictionary that’s one of Trump’s funniest fact checkers
WCTI12.com