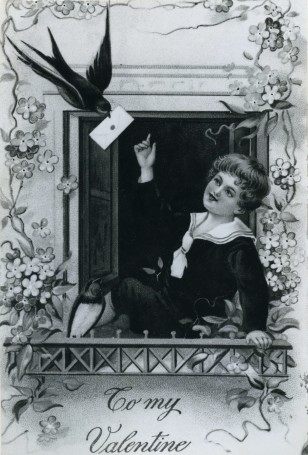 We’re told to “take heart” when things aren’t going our way, “have a heart” when we’re being cruel, “listen to our hearts” when we don’t know what to do, and “speak from the heart” when we aren’t sure what to say, but tomorrow — Valentine’s Day — is the one day each year when we’re encouraged to give our hearts to others. Why? What is it about this organ that makes it the central theme on this day of manufactured emotion?

In a search for answers, I hit the references … starting at the beginning.

The Webster’s New World Dictionary of the American Language, defines heart as:

1) The hollow, muscular organ that receives blood from the veins and sends it through the arteries by alternate dilation and contraction.
2) The part of the body thought of as containing the heart; breast; bosom.
3) Any place or part like a heart that is near the center; specifically, a) the central core of a plant or vegetable b) the center or innermost part of a place or region; as in the heart of the city.
4) The central, vital, or or main part; essence; real meaning; core.
5) The human heart considered as the center or source of emotions, personality, or attributes, etc.; specifically a) inmost thoughts and feelings; consciousness or conscience b) the source of emotions: contrasted with head, the source of intellect, c) one’s emotional nature; disposition (as in, she has a kind heart) d) an of a variety of humane feelings, as in love, devotion, sympathy e) mood; feeling, as in, I have a heavy heart f) energy; spirit; resolution; or courage.
6) A person, usually one loved or admired in some specified way, as in, he has a valiant heart.
7) Something like a heart in shape; a conventionalized design or representation of a heart.
8) Any of a suit of playing cards marked with such a symbol in red.

Okay,  you probably knew all that. What you might not know, however, is that the origin of the word can be traced all the way back to a Sanskrit word meaning, “that which quivers.”

The Oxford Dictionary of Word Histories traces heart back to Old English heorte, which is Germanic in origin and related to Dutch hart and German herz, from an Indo-European root shared by Latin cor, cord- and Greek ker, kardia. The Arcade Dictionary of Word Origins agrees, as does The Concise Dictionary of English Etymology, which adds the Sanskrit hrid, hridaya, the literal interpretation of which is “that which quivers.”

Suddenly, the notion of one’s heart “fluttering” when its owner is in the presence of his/her lover (real or imagined) makes a hell of a lot more linguistic sense.

Of course, when it comes to Valentine’s Day, all these definitions and insights into the origin of heart are just preamble. On this, the mushiest of days, the heart’s role is symbolic. Hence the following information from our symbolic dictionaries.

The entry for heart in the Continuum Dictionary of Symbols begins with an overview of how different cultures around the world view(ed) the heart. For example, in ancient Greece, it represented man’s thinking, feeling, and wanting; in Islamic cultures, the heart was seen as the site of contemplation and spirituality; In India, it is regarded as the place of contact

with Brahma; so on and so forth. The entry concludes by saying that:

Especially since the mysticism of the High Middle Ages, heart symbolism modeled on the symbolism of love (the flaming pierced heart of Christ, Mary, and the saints). Today, the heart is generally regarded as a symbol of love and friendship.

Cirlot’s A Dictionary of Symbols takes a similar tack. After mentioning how the heart was the only “part of the viscera” left by the ancient Egyptians in the mummy, considered the true seat of intelligence in “traditional ways of thought” (with the brain being merely instrumental), and portrayed as the “sun in man” by alchemists,  it notes:

The importance of love in the mystic doctrine of unity explains how it is that love-symbolism came to be closely linked with heart-symbolism, for to love is only to experience a force which urges the lover toward a given center. In emblems, then, the heart signifies love as the center of illumination and happiness, and this is why it is surrounded by flames, or a cross, or a fleur-de-lis, or a crown. [Note the graphics on the right that feature flaming hearts along with some of these other symbols.-Ed.]

The notion that the heart, the seat of love, would be paired with fire (… or even religious symbols) should not be lost on anyone, for when fully set alight, all three consume their victims so completely that none are ever the same once they’ve passed through the flames. Hence the following, final words from the Harper Collins Bible Dictionary, which speaks of heart this way:

Since the heart is the center for decisions, obedience, devotion, and intention, it represents the total human person. Within the heart, human beings meet God’s word and thus the heart becomes the location where conversion takes place.