Well, the NHL playoffs start Wednesday (April 12) and, once again, the members of my hometown team — the Buffalo Sabres — will be watching the action on television just like me. The Sabres haven’t been involved in the post-season since 2010-2011 (WTF?!?!) and for fans of the blue and gold like yours truly, it’s getting old … and a little pathetic. That’s okay. I can take it. I am a fan of the sport in general and, over the past six seasons, I’ve learned to appreciate a good game regardless of which teams are on the ice. 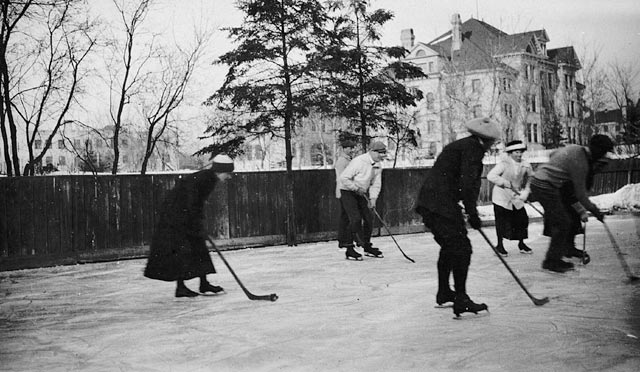 I do have a question, though. (I mean, a question other than “What’s wrong with the Sabres?”) Where did this sport get it’s name?

The answer, it seems, is something of a mystery. The best guess is that the word comes from a French word for “bent stick.” According to the Webster’s New World Dictionary of the English Language:

That’s one hypothesis. Another comes from the (Ayto) Dictionary of Word Origins, which cites a different  source.

hockey – The first known unequivocal reference to the game of hockey comes in William Holloway’s General Dictionary of Provincialisms (1938), where he calls it hawkey, and describes it as ‘a game played by several boys on each side with sticks, called hawkey-bats, and a ball.’ It is not known for certain where the word originated, but it is generally assumed to be related in some way to hook, with reference to the hockey stick’s curved end.

“Hockey” from “hook,” I can see that. In search of a more definitive answer, though, I brought out the big gun: the (compact) Oxford English Dictionary. Sadly, it wasn’t any more precise … or definitive.

Hockey, also hawky, hawkey. Origin uncertain, but the analogy of many other games makes it likely that the name originally belonged to the hooked stick. Old French, hoquet ‘shepherd’s staff, crook’ suits form and sense, but connecting links are wanting.

“Connecting links are wanting”? What the hell is that? Oh well, at least there seems to be something of a general consensus if not an outright answer. Thankfully, as something of a consolation prize, I did find some good hockey-related slang. The first comes from the Facts on File Encyclopedia of Word and Phrase Origins, the second and third are from the (Partridge) Dictionary of Slang and Unconventional English.

hockey puck.  A hockey puck is a fool, a lamebrain, a blockhead, a numbskull or any of a hundred similar adjectives—in short, an inert someone who can offer no resistance to the blows of life or someone who is knocked around like a puck by a stick in the game of hockey. The term seems to have been coined by insult comedian Don Rickles* in the early 1970s.

hockey club, the.  A, the, venereal hospital. (New Zealand soldiers, WW1) Ex. a hockey-stick-shaped instrument used in the treatment of VD.

Well, that’s it for this entry. I am aware that, like the Buffalo Sabres’ 2016-2017 season, this was somewhat lacking. Be that as it may, you did the right thing by taking 5 minutes for etymology.

Thanks for reading and, to quote Red Green, “Keep your stick on the ice.”