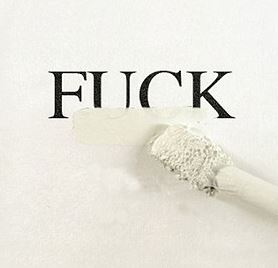 I’ll admit it: the word fuck amazes me, and if you’re into words, language and the like, it should amaze you too. Not because it’s naughty or taboo, of course, but because it’s versatile! Think about it: What other word, low-brow and unrefined as it is, applies to so many situations and means so many different things? Even the ubiquitous shit plays second fiddle to it!

From ignorance (stupid fuck) to intercourse (fuck) and incredulity (what the fuck!?!) to exasperation (fuck my life!), the f-word is nothing short of fabulous in its functionality. Nevertheless, I can’t help but wonder: Where does this word come from and why does it have so many uses? Let us try to find the fuck out!

“Our word for the act of sexual connection may remotely come from the Latin word for the same, futuere, but [it] most probably is from the Old German ficken/fucken, ‘ to strike or penetrate,’ which had the slang meaning ‘to copulate,” says the Facts of File Encyclopedia of Word and Phrase Origins. “The German word is almost certainly related to the Latin words for pugilist, puncture, and prick, through the root pug, which goes back to prehistoric times.”

The (Ayto) Dictionary of Word Origins agrees about this verboten word’s German roots, but not much else.

“There is little doubt that it is of German origin, but it’s precise source has never been satisfactorily identified. All the earliest known examples of the word come from Scotland, which may suggest a Scandinavian source, related to Norwegian dialect fukka ‘copulate,’ and Swedish dialect focka ‘copulate, hit’ and fock ‘penis.'”

Not to be outdone, Eric Partridge’s etymological dictionary of English, Origins, offers a similarly unsatisfactory account of the word’s lineage in the most superb and roundabout way possible.

“That f**k cannot descend straight from Latin futuere … is obvious; that the two words are related is equally obvious. That it cannot derive unaided from German ficken, to strike, (in popular speech) to copulate with, is clear; it is no less clear that the English and German words are cognates. ‘To f**k’ apparently combines the vocalism of futuere+the consonatism of ficken, which might derive from fucken (only dubiously attested).”

I can’t be sure, but I think Partridge is fucking with us….

fuck, n.  1. An act of sexual connection.  2. A person (rarely a male) viewed in terms of coition, as in ‘She’s a good f.’ These two sentences are excellent examples of vulgarism, being actually standard English.  3. The seminal fluid, especially if viewed as providing the requisite strength (full of fuck, potently amorous).  4. In such intensive phrases as ‘Get the fuck out of here!’ fuck is apparently a noun.  5. See create fuck ‘to make a considerable fuss, usually in protest of something.’  6. See like fuck!, ‘certainly not!'”

This excerpt is by no means an exhaustive list, but don’t worry, Partridge has you covered. His Dictionary of Slang and Unconventional English lists more than 50 entries featuring this most famous four-letter word as an adjective, noun, or verb. You simply must check it out for yourself.

Beyond the word’s origins and use, several of the books in the Lonely Library’s collection contain some interesting facts about the f-word that I’ll share below, as well as a few words that are, or ought to be, related to it.

First and foremost, you may have noticed that in the excepts from Partridge’s works, fuck is not spelled out because, as he notes in Origins:

In a related item appearing in he Facts of File Encyclopedia of Word and Phrase Origins:

“Fuck began to become more rare in print in the 18th century when human experience began to be disguised behind a “veil of decency,” and the last dictionary it was recorded in up until recent times was Francis Grose’s Dictionary of the Vulgar Tongue (1785) in the form of f**k. The great Oxford English Dictionary banned it, just as it banned cunt (but not prick for some reason), and this made the word’s acceptance all the harder. … It wasn’t until Grove Press in America won a court case that permitted publishers to print fuck legally for the first time in centuries.”

In yet another related note, the Dictionary of Euphemisms and Other Doubletalk tells the tale of the word fug, which some writers used as a stand-in for the f-word.

fug. Fuck; a historical curiosity, popularized by Norman Mailer before it was safe to legally print the real word in full. It continued in service for some years after the ban on the real f-word began to be relaxed.

Finally, while searching the Lonely Library’s collection for “fuck” entries, I came across the following word in [Samuel] Johnson’s dictionary:  fugh, which could easily be used like fug, although fugh sounds more like the real deal — and just look at that definition!

fugh. An expression of abhorrence. As in, “A very filthy fellow: how odiously he smells of his country garlick!”