Earlier today, I came across an article with the headline, “Is Trumpism a Heresy?”

“It could be,” I thought to myself, but it depends on a few things. First, what the hell is Trumpism? (This “alternative-word” presumes he’s capable of developing coherent system of thought.) Second, heretical in what context? To the constitution? To the nation? To Christianity?

Given the nature of the publication (a Catholic news website that goes by the name The Crux), I assumed the writer meant heretical to Christianity. Thus, I assumed the answer to the question posed in the headline was, “Yes.” (I mean, how could it not be?)

Trumpism and politics aside, though, what really got me thinking was that word heresy. Soon after I put my eyes on it, I realized that, after a lifetime of church-going and rubbing elbows with Christians of various types (and intensities), I really didn’t know what that word meant.

If forced to define heresy at gunpoint, I would say something along the lines of a philosophy that ran contrary to or afoul of some core teaching in any number subject areas including, but not limited to, a particular set of religious teachings. As it turns out, this is just the tip of the heretical iceberg.

Before I get into that, though, how about I start with some etymology, which in this case, lays a nice foundation for a proper understanding if the word. Given that preamble then, let’s start with the Oxford Book of Word Histories, which says of heresy:

This comes from Old French heresie, based on Latin haeresis ‘school of thought,’ from Greek hairesis ‘choice’: this same word in ecclesiastical Greek meant ‘heretical sect.’ The base verb is haireomai ‘to chose, take for one’s self.’ Heretic is Middle English from Old French heretique, via ecclesiastical Latin from Greek haeretikos, ‘able to choose.’

As I’m always interested in a second opinion on this sort of thing, I turned to the John Ayto’s Dictionary of Word Origins (often a contrarian book in its own right) to see what it had to say. To my mild surprise, it largely agreed with its Oxford-ian ilk, but its entry for heresy also includes the following:

A heresy is a choice one makes … [and] … this was applied metaphorically to ‘a course of action’ or ‘thought which one chooses to take,’ hence to a particular ‘school of thought,’ and ultimately to a ‘faction’ or ‘sect.’ The word passed into Latin as haeresis, which early Christian writers used for ‘unorthodox sect or doctrine.’

Okay, so I was wrong about the there being a place for heresy outside of religious realm. I know it’s used this way haphazardly from time to time (You don’t like Cheetos?!? Heresy!), but, clearly, the religious roots of the word are undeniable. However, as noted by the Oxford Dictionary of the Christian Church (ODCC), heresy was more than just the harboring of “wrong” or “unacceptable” beliefs or philosophies, it also included simple theological mistakes, be they intended or not.

In antiquity the Greek word denoting choice or thing chosen, from which the term derived, was applied to the tenets of particular philosophical schools. In this sense it appears in occasionally in Scripture and the early Fathers. But it was employed also in a disparaging sense and, from St. Ignatius onward, it came more and more to be used of theological error.

So what’s the difference between espousing a non-kosher philosophy and making a boneheaded theological error? Well, as far as the Catholic Church is concerned, it could mean the difference between excommunication and a disapproving wag of the finger. Hence the distinction made in current Roman Catholic teaching, which according to the ODCC, makes a distinction between ‘formal’ and ‘material’ heresy.

The former, which is heresy proper and so called, consists in the willful and persistent adherence to an error in matters of faith on the part of a baptized person; as such it is a grave sin involving excommunication. ‘Material heresy,’ on the other hand, means holding heretical doctrines through no fault of one’s own, ‘in good faith.’ … This constitutes neither crime nor sin, nor is such a person strictly speaking a heretic, since, having never accepted certain doctrines, he or she cannot reject or doubt them.

Now about that headline that started this whole thing. Maybe the answer to the question it poses is not yes or know, but, “Does he know any better?”

To see a list of the books in the BLRL’s collection, click the link beneath the header image.

Unless otherwise noted, the posts that appear on this blog are the intellectual property of the Butter Lamb Reference Library and should be treated as such. If you’d like to copy or reprint something go ahead, but please give credit where it’s due (and send me a link). 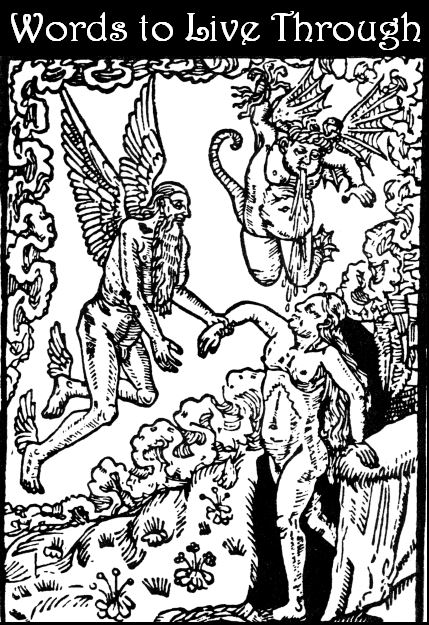 NEW FROM THE BUTTER LAMB! Words to Live Through a 32-page booklet that blends embarrassing stories with Butter Lamb-style word analysis. Get one for just $4! Email for ordering info (PayPal Accepted).